Home » Om Singh, owner of Mumbai Aces is all praises for actor Sharad Kelkar, captain of the team and the players

Om Singh of Onze Talent who acquired Mumbai Aces Team of the much-awaited cricket leagues of 2019, Actors Cricket Bash, says that because of actor Sharad Kelkar’s cricket skills it was and easy decision for him to make.

“My love for Mumbai and knowing Sharad sir’s ace cricket skills, it was a no-brainer that Mumbai Aces would be the best team to invest in. “said Om Singh.

The concept of this cricket league was introduced to Om Singh by Mr. Dilip Agrawal, who has previously handled top cricketers like Saurav Ganguly, Yuvraj Singh and Zaheer Khan. “Actors Cricket Bash is a great concept. I love the fact that all the celebrities involved get to play cricket together. When he (Dilip Agrawal) told me about this idea, I was quick to ask him to count me in.” Added Om who brought the Onze talent franchise about a year ago. ACB would mark the first sports event by Onze talent.

Speaking about actor Sharad Kelkar who’s the captain of Mumbai Aces, Om says “Sharad sir is extremely humble and down-to-earth. I really like that he makes such a great team leader, and is a great source of motivation for all the team players.” 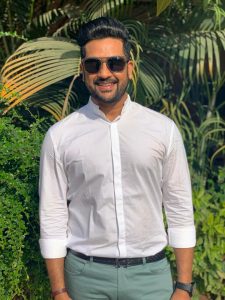 Reporter : Om Singh, owner of Mumbai Aces is all praises for actor Sharad Kelkar, captain of the team and the players